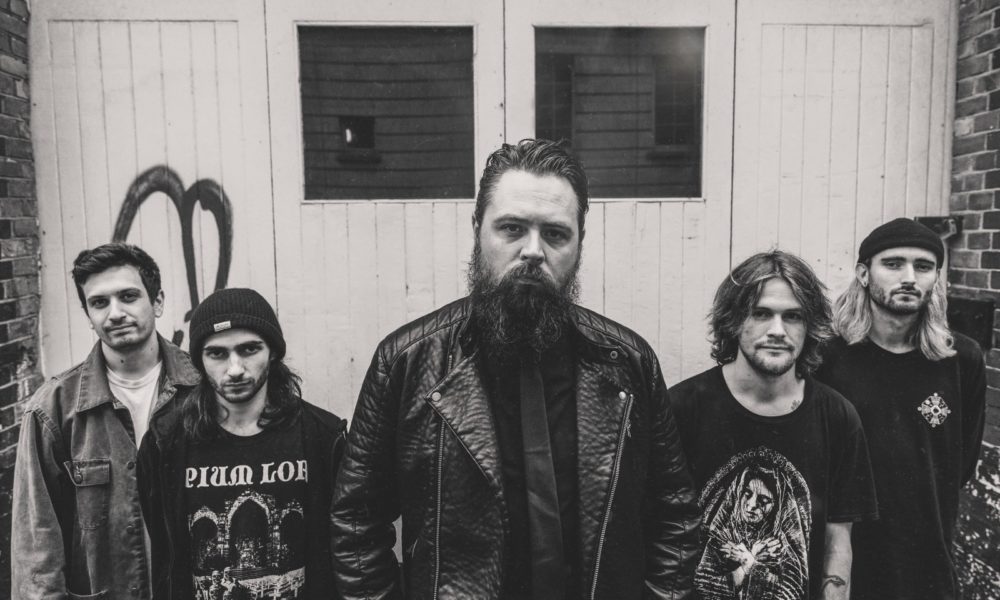 Even for a genre in which catharsis is the main motivator for countless artists, the sheer passion and vulnerability displayed by Aerosol Jesus frontman Oli Melville is frighteningly intense. Where metal is often about acting tough and maintaining an antagonistic facade, Melville’s raw screams and desperate spoken-word sections are palpably vulnerable – uncomfortable to endure not because of incessant gore or pitch-black nihilism, but because they’re so undeniably human, unashamedly battling with personal demons that many of us commonly opt to bury beneath the surface.

With such a powerful presence, Melville could not be fronting a more fitting band. Aerosol Jesus’ music is amongst the most powerful in the UK underground, featuring a dynamic blend of tar-drenched sludge, biting black metal and expressive post-hardcore. The sheer harrowing might of this ultra-heavy, maximalist sound is truly astounding, and by refusing to firmly plant its feet in one particular style it takes on an unsettled, scattered aura that embodies the fraught nature of Oli’s lyrics.

The band’s 2018 debut EP, Failure, was an imposing showcasing of their abilities. When we heard it, we set up Astral Noize Records much earlier than initially planned just to help put it out. But with a new record entitled Survive now on the horizon, Aerosol Jesus are surely set to become one of the leaders of the UK’s vibrant DIY heavy music scene. As we chat with Oli following several months of lockdown, he tells us about the band’s upcoming record and why their message is a positive one – first, though, we talk about their origins.

“I think Tom, Rauri [guitarists] and Frank [drummer] were jamming together after the breakup of Grindhouse,” the vocalist recalls. “Around that time I had put up online that I was wanting to get back into vocals. The last band I was doing vocals in was a wonky noise rock band called Kick Nurse. I got a message from Tom after he heard me doing vocals on the track ‘Guilded Heart’ from Sunwølf‘s record Eve – he invited me down to rehearse with them. I wasn’t sure at the time as I wasn’t massively into doom and slow tempo stuff. But when I got there I realised there was something different about it. Sam [bassist] came a bit later on. We were jamming for quite a while before doing our first show.”

It’s interesting that Oli mentions that he wasn’t into doom. One of the main reasons why Aerosol Jesus’ fierce music works so well is that it traverses several genres seamlessly. “I honestly think the magic of the band came from a vibe of ‘look we don’t really know what this is,’” he admits. “There didn’t seem to be any preconceptions of what we wanted to sound like. It was mashing up influences in a really simple but effective way. When you get that from people who have genuine chemistry and respect you get something great in my opinion.”

Oli’s vocals are perhaps the key cog in this sludgy machine. Instead of your standard deep growls, his desperate cries and poignant spoken word help inject meaning into the music. When combined with his personal lyrics and the cover art that Oli is also responsible for, you can almost feel the catharsis taking place. “Aerosol Jesus came at a time when I really needed it,” the frontman reveals. “I was going through a really awful time and here were a bunch of guys who were completely willing to let me express myself freely and openly. It’s a difficult thing writing and performing in the way I do. It was never a conscious decision to do it like that, I just sort of fell into it from a need to get that stuff out, like you say in a cathartic way. I think back to those times and feel sick to my stomach. I didn’t really care if people got it or not. It was something I needed to say for myself to try to understand myself better – to try and heal. I had no idea people would respond to it. I just sort of thought, well this is who I am, warts and all. People will either like it or they won’t but it’s what I need to say.”

It’s refreshing to see such open expressions of inner turmoil within heavy music. Though just as it can be tough to open up and have these potentially uncomfortable conversations in our daily lives, even a cursory listen to Aerosol Jesus’ music can be a taxing ordeal. You have to assume it’s even tougher for Oli. Sure, it’s important to be able to express any struggles we may be having, and fronting a band is one way to vent, but for a touring band it also means confronting those issues repeatedly.

“I find performing that stuff quite a burden and a release at the same time,” Oli tells us. “Aerosol Jesus for me is a living in the moment type of deal. I get a hell of a lot out of it but sometimes I feel like it’s opening old wounds. After we are done playing I find myself retreating socially and mentally inwards. I rarely feel like socialising after and I think I come across so awkward. It’s taken me over 30 years to work out that I am an introverted extrovert. I think dealing with anxiety and depression coupled with a rush of adrenaline and expressing self ugly truths takes a toll as well as gives a sense of freedom in playing live. I guess the short answer is ‘it’s complicated’ but I put myself through these emotions because I genuinely believe we promote a positive message.”

Anyone who has seen the band will know just how powerful their shows can be, with Oli’s passionate delivery always captivating those in attendance. Amongst the South coast DIY metal underground from which the band were bred (though Oli’s Scottish origins can be picked out in his delivery on Failure), their live show has a reputation for being a particularly intense experience. For obvious reasons, however, the band have been unable to perform, rehearse or even meet up for several months now. For a musician who uses music as a release from the stresses and struggles of everyday life, you have to wonder what kind of impact this enforced isolation has had.

“During lockdown I tried to keep as busy as I could,” the vocalist explains. “I’ve been writing and illustrating. It’s been tough without playing and I miss it very much. I definitely miss being able to get that stuff out and it has affected my mood immensely. Like many other people it’s not been easy and with news of venues closing for good it leaves a bad taste in the mouth. I am lucky I have a very supportive partner who keeps me grounded and genuinely puts up with my shit. I am not an easy person to live with by any stretch of the imagination. Mood swings and depression are extremely hard to manage without live music for me. But I am just trying to be  calm and hopeful on getting back to it.”

The near future doesn’t look too bright, with essential distancing measures likely to be kept in place for some time and the risk of a second wave in the UK remaining very much present (despite what our cock of a Prime Minister says about returning to normal by Christmas). The thought of live music’s return is one thing keeping us going though, and the prospect of seeing Aerosol Jesus with new music in tow is especially exciting.

“The new record is almost done,” Oli reveals. “It’s been a long wait but we have label support in Sludgelord and Black Voodoo to help with the cost of the vinyl and helping us with promotion of it. The art is all finished and we are just waiting on a time frame to release it, when that will be I am not sure. It’s shitty timing with the pandemic, it brought things to a halt for a while but it also gave me a chance to get the art spot on. I think it’s there.”

Sonically, Failure was a clear standout from what was an incredible year for doom and sludge in 2018, but the follow-up promises to be even grander in scope. “It’s definitely more dynamic in terms of delivery,” the frontman says. “I wanted to have a theme for Survive so it’s largely about how a lot of people are not living, just surviving. It’s about how we are dealing with the pressures of everyday life. From anxiety to mortality. To me it has a ‘running out of time’ feel to it. I wanted the songs to connect but still have their own space and feel. So the song titles link – ‘Cowards’, ‘Survive’, ‘Others’, ‘Just Drown’. I wanted to make the lyrics really put that point across.

All signs are pointing towards Survive being another astounding release sure to help Aerosol Jesus rise to the top of the UK doom underground. “I really can’t wait for people to hear it,” says Oli. “I really hope people like it. It is something we worked really hard to bring about.”

For Oli and his bandmates, the hard work is surely about to pay off.