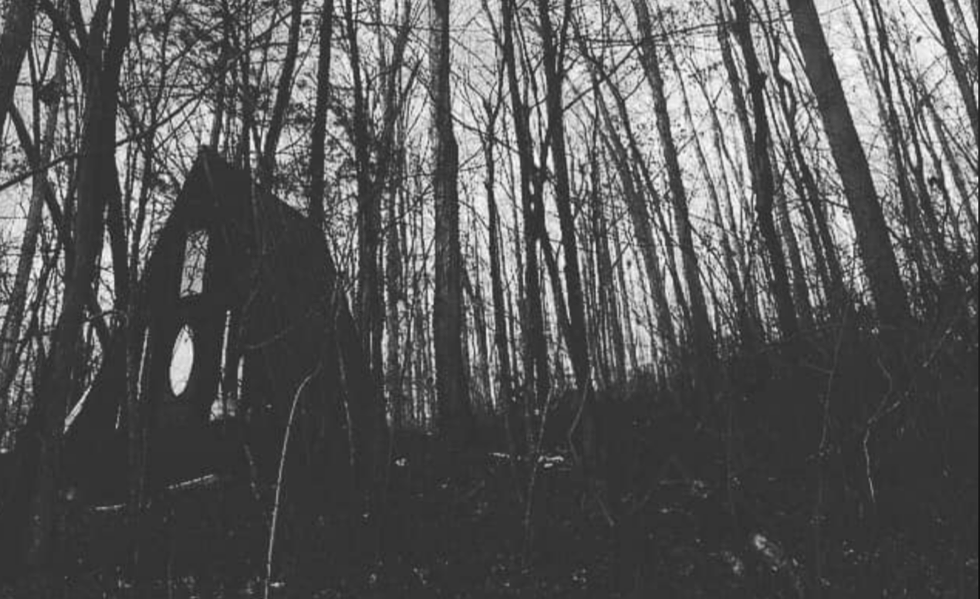 It’s a longstanding tradition for black metal to take inspiration from the location in which it is forged, and where better to inspire such music than the woods? Atmospheric black metallers Feminazgûl impressed the scene two years back with their debut EP The Age Of Men Is Over, a feminist re-imagining of Tolkien aesthetics written whilst founding member Margaret Killjoy was living in a barn. By the time of the project’s new full-length, No Dawn For Men, she was living in a house she built herself in the woods. It’s clear that the beauty of nature inspires Killjoy’s music, and after being enamoured with Feminazgûl’s immense new record, we felt compelled to find out more.

In this piece, we take an inside look at the multi-instrumentalist’s living quarters, and find out how these new surroundings have helped inspired her creative output.

How did the idea to build your own house come about, and when did you decide to go through with it?

I’ve wanted to build my own house since as far back as 2005, I think. I was doing forest defence in southern Oregon, living in the woods fighting old growth logging, and there was this book on DIY underground houses floating around and it put the idea in my head. I spent most of my adult life as a squatter and a wanderer, and I’ve helped out a decent number of folks with their shacks and cabins. At the very least I assumed I was going to one day build a squat shack illegally in the woods somewhere sometime. I went through with it when finally, after years, I had the right combination of access to land and income.

How did you decide where to build it?

I moved onto a land project full of anarchists about three years ago. First I built up a bedroom in the upstairs of the barn, but I knew that long-term I was going to build a house on the property. Most of the structures are in a field, where you can access them by car, but I wanted to build in the forest, so up the hill I went.

Building on a hillside presents its own challenges, which I only half understood when I started. First, I tried to dig the whole spot flat. Two weeks (of eight-hour digging days) later I was… a quarter way done? Half of the ground was level. So I put half of it on posts and the other half on concrete pier blocks.

We imagine there’s a lot to consider going into something like this. How long did it take to plan and then build?

It took forever and it didn’t. Like, some parts of it happened so fast – one day I had a platform, maybe two days later I had the rafters up. A couple months working on and off got me through most of the work, but I took several long breaks to travel or when I ran out of money. All in all, from breaking ground to moving in, about a year? And then the year or so since then, I’ve been working mostly on improving the interior and building amenities and furniture.

Roughly how big is it?

Oh, it’s fuck-off tiny. I wish it were bigger. The platform is 12’x16’ (uh… 4 meters by 5.25 meters, maybe?) and the house itself is 12’x12′, though about 15′ tall at its peak. I built a loft inside for my bed, so I have the entire downstairs for living space. Kitchen counter with sink and stove, cabinets and shelves, and a bench (that used to be part of my bed before I built the loft). I built the house small because I assumed it was all I could afford. I was probably right, unfortunately. Still, I think I would have tried to build it a bit bigger. Originally my plan was to throw this one up “quick” and then start work on a “real” house on the same plot of land. Which wasn’t actually a terrible idea… I made a ton of mistakes on this little thing that would have been magnified a lot if I’d made them on a more expensive project. Also, an A-frame is a really forgiving shape to build. I recommend it for a first house. It’s a terrible use of space, though. If my house was 12’x12′ with vertical walls instead of angled walls, I’d have way more usable space. I’d also have an easier time hanging things. But fuck it. I like my weird witch hut the way it is. I’ve had to custom build every piece of furniture as a result, but it really is satisfying. I’m writing this on a bench I built that’s tied into the frame of the house.

Did you have experience with similar projects, or was it more a case of learning as you go?

Mostly learning as I went. I retrofitted the van I used to live in, building furniture and insulation and a floor and all that shit, about six years ago, which was the first real carpentry work I’d ever done. Since then, I’ve just been learning more and more about woodworking and such. I’ve been a helper on a lot of projects, but this is the first one I was in charge of. So I read books, I ran my plans past more experienced builders, I watched YouTube tutorials on shit like how to flash windows, and I made up a lot of it as I went. Got a lot of things wrong, too, and the house is probably forever a work in progress. I like that, though.

The house looks pretty badass. Now that it’s finished and you’ve been living there for a while, does it match your expectations? What’s life like in the house?

If I went back and did it again, I would have made it half again or twice as big. Probably 16’x16′ with 24’ rafters. It’s small. I love it, though. I love going to sleep in a space that I designed myself to meet my aesthetic needs. Most people who build DIY houses go for practical, but I just absolutely knew I needed the fucking weird windows and the pointy roof and to paint it black and all that shit. I needed that. Because every night when I climb up that steep hill to go home, I smile, because I live somewhere beautiful. Aesthetics matter way more than I thought when I was younger.

Life in the house is simple enough. I cook downstairs, I write in bed upstairs. I work on music in either place, depending on my mood (if I need instruments, I’m downstairs – digital stuff, I do in bed because I’m a lazy bastard). I am completely off grid and don’t have a well, so I haul water and propane up the hill. I sometimes think the only thing I do with my life is haul heavy things up the hill. My sink is a footpump attached to a five gallon jug and up into a sink that empties back out into a bucket. Soon I’ll run a pipe through the floor and drain it directly out. My heat is a propane heater – have to keep the tank outside so a hose goes through the floor. Electricity will eventually be solar, but for now it’s me charging lots of various batteries in various places. I got a 12v fridge that only draws 40 watts I should be able to run. I’ll get a cell signal booster so I can get better internet on my tethered cell phone. I want to build a craft space, probably a shed outside, even though it means I’ll only be able to use it maybe 6-8 months of the year. One day the dream will be to build a shed and soundproof the fuck out of it so I can finally record without tons of ambient noise and use fancier mics instead of using an SM58 for everything.

Do you think that living in such surroundings has had an impact on your creative output? Did it inspire the new Feminazgûl record in any way, for example?

Absolutely. I wrote the first EP while living in the barn, and walking outside at night to stare at the misty fields and the mountains in the distance is such an inspiration. Deer in the fields, hawks overhead. Whatever else goes terribly, however annoyed I am about where I live (it’s muddy and the field floods and my hill is steep and I miss broadband) I am intensely grateful for the physical beauty around me. The first sample in the first Feminazgûl EP is rain on a steel roof, because I was listening to rain on the steel roof of the barn when I wrote it. The first sample on the full-length album are birds from this region, because they are what I wake up to. Well, at the moment I wake up to a woodpecker. I finally understand why he’s the annoying character in that kid’s cartoon.

Speaking about living situations right now, it’s hard to avoid the current circumstances. How has living in a more secluded area impacted your life during the current COVID-19 pandemic?

I can’t decide if it’s better or worse. I can’t specifically recommend it. I really wish I had broadband and regular access to electricity, I’m missing out on all the facetiming, and at the moment I don’t have enough electricity to do what I really want to do, which is record a Vulgarite full-length or start writing more Alsarath songs to send to Jack up in Montreal. I’ve learned a lot about… okay hear me out. So you know there’s that Twilight Zone episode where the guy survives a nuclear bomb and he’s so stoked he gets to read books, but then his glasses break? When I was young I thought the moral of that was “damn, life is shit” or something. What I’m thinking about now, that I should have realised then, is that instead, it’s complex society that actually gives us access to things like books and spare time and the glasses with which to read. Like yeah because of capitalism and cell phones we don’t take the time we need to enjoy life. But… if I were holed up in a nice on-grid house with access to inside plumbing and unlimited electricity and all of that, I’d be more productive. I spend an awful lot of my time right now working on making this place meet my needs, because I’d designed my life around living in the woods but working in town. Now I’ve got to figure out how to do it all in the woods.

A month from now though, I bet I’ll be pretty fucking glad I’m here.

No Dawn For Men is out now. The band are offering the album as a pay-what-you-can download because of the current global crisis. Listen and download here.