If you’re one of those insufferable sods like me who’s “very online”, you might have seen some posts go around certain Facebook doom metal groups recently, featuring a snivelling waste of air named Clint Beed, who has a long history of making anti-Semitic, racist, homophobic and misogynist remarks. Unfortunately, Clint is also the owner and administrator of the Stoned Meadow of Doom (SMOD) channel on YouTube, which as I write has over 353,000 subscribers and its own community Facebook group, which I was a member of – for a time. Herein lies a tale of the Venomous Beed.

When I first discovered the SMOD channel I was delighted, and who wouldn’t be really – a free and easy way to discover new doom, stoner and psych bands, all managed through a YouTube subscription. From the consumer’s view the channel is a shining example to others in terms of its massive back catalogue, regular updates and quality control, as well as giving you the full YT experience, with a backup channel and plenty of information on each album, sometimes even including full album reviews. It’s an impressive setup for sure, and I joined the Facebook group shortly after. I was lucky; I saw it just before everything went downhill, when it was merely a place to post recommendations, discuss music and share in the doomy misery/joy. What I missed was the way that the bands themselves were treated, with their albums often being uploaded without permission – such as Horseburner, who, when we reached out for clarification following this post, told us that their album just appeared on his channel with no prior warning – and reviews being lifted from blogs without credit. This is shitty, underhanded behaviour so often excused by free marketeers in the name of “efficiency” (read: maximal profit with minimal effort), and would be more than enough reason to unsubscribe. 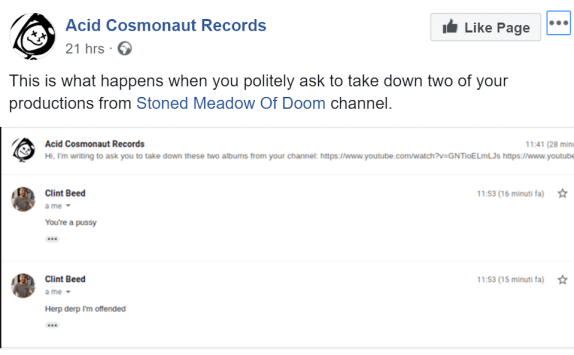 However, soon it became clear that Clint was teaching himself semaphore, because there were red flags all over the place. In the summer of 2018, SMOD’s “Shitpost Saturday” took off. The stated aim was to allow off-topic posting on Saturdays, to let the community “let off some steam”… after a hard week of getting baked and listening to 1000mods again, presumably. This quickly degenerated into a haven for some of the most irksome and hateful characters in metal to emerge, anime avatars and fascist doge memes at the ready. Even stoner metal suffers from a right-wing contingent amongst its ranks, even if it differs somewhat from the pathetic posturing of NSBM.

On one thread which featured some particularly aggravating pro-Nazi memes, I couldn’t stop myself from screaming into the void, and threw my two cents in. Being Jewish, I can’t say I was particularly pleased, and when the offending shitlords replied it was with the squirming tone of those caught red-handed, never having had to confront the real meaning of the signifiers they were so keen to throw around. This is just typical of the alt-right though – hating the spectacle of society (something shared across metal fans as a whole) but falling too far into a virtual existence, where meaning, the image and the Real are flattened into an amorphous plane where Hitler apparently “did nothing wrong”. But there will come no Deus Vults, only Domino’s deliveries. I drew neither pleasure nor catharsis from the experience; I had forgotten the golden rule to Never Argue on the Internet.

Clint, of course, did nothing to stop any of this. In fact, he was often to be found commenting in support of the most virulent shitposters, citing the old (and very boring) argument that it was their Freeze Peach, regardless of how many Sieg Heils were included. Later, on Reddit, Clint would of course claim that “social media bad mouthing is CHILDISH” while in the same thread also calling a detractor an “internet tough guy” with a “cock sucking mouth”. His attitude is plain to see in these few short comments, just without the obvious dog-whistles or outright sexism (which he was wont to do within the high walls of the private Facebook group). Having the support of a gang of wraparound-wearing 40-somethings who look like they all upload YouTube videos ranting about the lack of REAL MALE REPRESENTATION in the Super Bowl half-time show must be pretty good for your ego. Apparently.

So, I left SMOD Nation, as did many others around the same time, and new groups sprung up to continue the discussions we’d been having. The community has known about Clint’s opinions and persuasions for some time now, but it seems that recently it’s reached critical mass. The comments that have been leaked aren’t even the worst things I’ve seen him post, but attitudes have changed a lot in the past couple of years. Metal, as with the wider culture, is perhaps more politicised than ever before, and voices from the left are becoming much more strident, especially with the US elections looming. Individuals have publicly decried SMOD and Clint, suggesting that the community stops supporting him en masse, which I fully support. He’s also, in typical alt-right fashion, issued an apology where he claims to have “no problem with anyone jewish or otherwise”, conveniently forgetting to capitalise the “J” while remembering to do so for Shitpost Saturday. Shows how much he really cares.

So, what to do now? It seems a ripe opportunity for doom metal fans to arise from their couches and engage in the scene’s political discourse, which is one I feel the left can seize for the better. Already we have numbers on our side, with most fans disgusted by what they’ve read in recent days (and beyond), and we also have metal’s long association with left-wing social critique – this is the same genre that gave us ‘War Pigs’, after all. Now we must head onwards, and pull the rug from under Clint and other right-wing excreta like him, whilst ensuring that the scene continues to be as welcoming and open as possible, allowing folk from all walks of life and all creeds to enjoy empowering, wonderful music together. All I wanted was some goddamn recs for doom metal, and instead we got this. Typical, but not irresolvable.

And as a final salvo to Clint: Fuck you, and fuck your whole setup. You’re a slimy profiteer with some really dumb takes, and I hope that you come round to a more inclusive worldview, or else be left behind by a scene you’ve tried to nurture. If you continue in this fashion, you will receive no sympathy when you put yourself in deeper shit.

Stoned Meadow Of Doom relies on the SMOD Nation Facebook group for clicks. If enough people report the page by following this link, it could be shut down for good.

Please note: the header image for this piece is the cover for Gravity X by Truckfighters. SMOD have used this as their logo but the band have publicly denounced Clint Beed’s actions. Him using their artwork is just another example of SMOD profiting off the work of others.