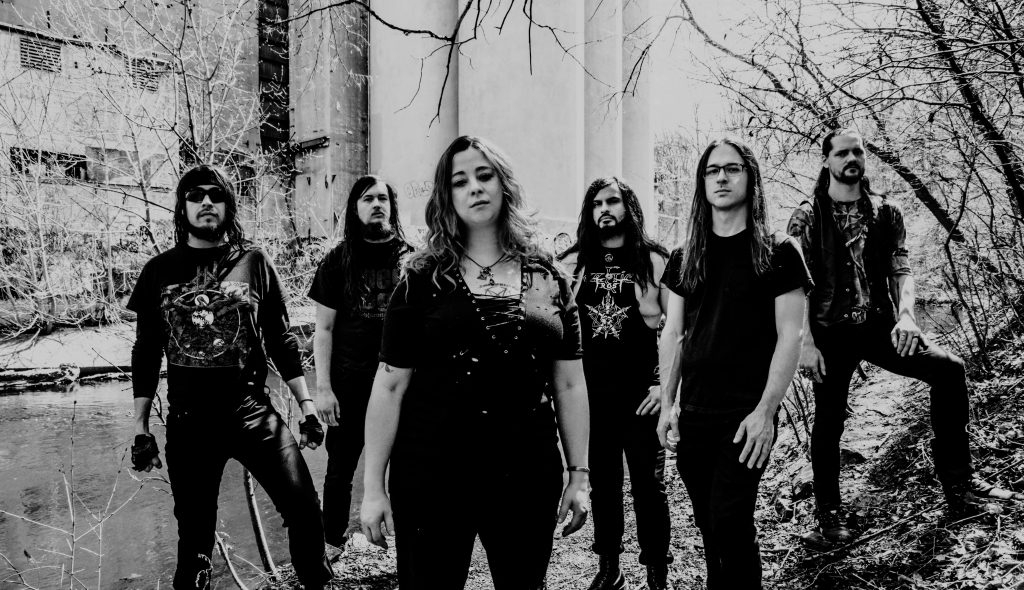 Loss can affect people in a range of different ways, and the means by which it can be dealt with comes in many shapes and sizes too, but it is something everyone goes through, and is a subject all can relate to. When it comes to black metal six-piece False’s latest offering, Portent, the bleak issue doesn’t just rear its head, it sits front and centre on the record.

However, the Minneapolis-based band aren’t relying on death to make their music dark and brooding, if anything, it is quite the opposite, in that there are elements of real beauty that shine through on the record as well as a sense of togetherness, which one can only experience through loss.

It’s a captivating album, and eager to find out more about its inception, we spoke to the musicians behind the band. What follows is an excerpt of the conversation, pick up Astral Noize Issue 5 for the full extended feature.

Even though you clearly fall under the black metal umbrella, your sound is very hard to define in terms of the addition of soaring synths and, at times, insane shredding guitars. When constructing the record did you have to carefully lay out how each instrument would sit in the mix?

Kishel (keys): We did pay closer attention to clarity in the mixing process, including a slightly cleaner guitar tone, changes in drum mixing and hardware, and less synth layers in general. We were more intentional about panning, with the guitars panned hard and the synth panned soft. The vocal range is broader than on most of our other recorded material, with more intention behind which passages are discernible and which are not.

Niko (bass): Adam [Tucker, producer] has a good sense and lets what needs to shine, shine.

On the record there is only one track which clocks in under ten minutes. When it comes to writing, do the songs just grow of their own accord?

Kishel: For the Hunger 7″ and the Decibel Flexi Series single ‘Neither Path Nor Gate’, we composed songs that were intentionally short and yet just as multifaceted and dense as our longer material. The process was organic but we approached it knowing we wanted to create condensed pieces. When we approach composing an album, we tend to think of movements in our pieces, which leads to longer songwriting. This seems to be what we do, and perhaps it’s the only way to access that multiplicity and scope that we need to represent. It’s also difficult to have a riff alone that lasts more than 60 seconds and keep multifaceted compositions below 10:00.

Niko: It’s hard for us not to write long material. I think of a riff as a fine wine, you open the cork and let it breathe, and it takes a while. You can’t open it and drink it all at once, you have to savour it over time.

The artwork of the new record is incredibly striking. What were the themes and vision that you had in mind for it? How did you arrive at the decision to use Mariusz Lewandowski?

Kishel: We sent Mariusz instrumental demos of our album material, and he fittingly created an image that includes past scope, and elements of hope as well as desolation, doom and loss. We selected Mariusz based on his fantastic work with Bell Witch‘s Mirror Reaper. He nailed it, and it is nice to see him enjoying greater levels of success and exposure in the international metal community recently.

Niko: Mariusz seems to have been heavily influenced by Zdzisław Beksiński, who was murdered by his nephew for $200. It’s tragic because I would love to see what he would be making today, and I think that Mariusz captures that pretty well.

With it being four years since the band’s debut release, how has your growth related to the output we hear in Portent, and what would you say has been the biggest shift as a band during that time?

Kishel: Our growth as people who love and support one another, our growth as a group, has made our music more emotional and has helped us to continue blending musically more effectively.

Skorpiain (guitars): The biggest shift has been a greater execution of articulation and intent.

Niko: I don’t think there has been a huge shift, we’re doing what we have always been doing. Any skill takes time to practice and get better at.

When the band first started to gain recognition you had only played a handful of shows and hadn’t really spoken to the media much, do you feel as time as gone by that False has, as a collective, opened itself up to wider interpretation?

Kishel: Yes, and this is something that we have started to understand more and we decided to be open to it. The music exists as a testament to the solidarity of human spirit, and if that is a point of connection then we also decided that we should embrace that, through things like this as well as what we’ve always done, which is talk to people at shows and make friends and get real.

Many of your members come from punk roots, is the punk ethos something that you still hold close as a band?

Travis (drums): Definitely, most of our members still play in DIY bands unaffiliated with black metal and it’s very important to us to continue that. False has always believed in playing music because it’s fun and supportive, not for notoriety or money.

Rachel (vocals): Sure, we have opened ourselves up to wider interpretation, but that hasn’t changed us at all. DIY or die. We will not always be in DIY settings, but we will always be willing to do our own work, to set up and record our own shit. To support our communities. I had an opportunity to record in the studio, and even though I absolutely love Adam Tucker, I would love to continue to only record my vocals at home, with my cat crawling on me as I crawl on the floor screaming.

The full extended version of this feature is available in Astral Noize Issue 5. 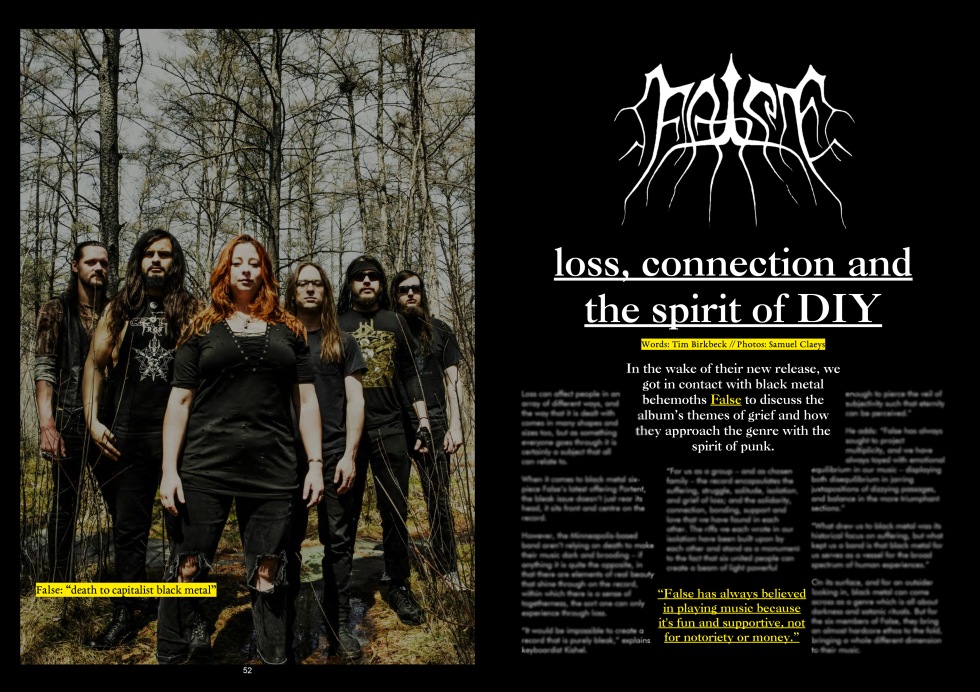