This piece originally featured in our fourth issue, available here.

Leeds-based sextet Hundred Year Old Man are bringing a fresh and gargantuan approach to the post-metal sound. They’ve already released the Rei EP and Breaching full-length this year, and have toured their intense live show across Europe and to Bloodstock Festival relentlessly, with no signs of slowing down.

“Post-metal seems to be a catch-all for bands that are doing slow, epic, progressive weird stuff. I guess that’s why it’s making a resurgence, but also catching a lot of bands that wouldn’t have been labelled as post-metal originally,” muses guitarist Tom Wright. It’s true that on the surface, HYOM take a leaf from the “Cult of NeurIsis” playbook, but Breaching is an album that feels fresh, taking equal influence from hardcore. “We all have a love of hardcore, especially Paul [Broughton]’s vocals,” chimes in guitarist Owen Pegg. “Everyone from Leeds does things slightly different,” adds bassist Paul Priest.

Breaching is truly a journey that has to be heard from start to finish, very much an album in every sense of the word. HYOM create dense, epic and atmospheric songs tied together with ambient interludes and samples from film and TV. “I have two folders on my computer for samples. The album is a lot lighter on samples than the live set,” explains TV and film-obsessed guitarist Owen. “The main one in ‘Black Fire’ is [politician] Harry Leslie Smith. It’s a big Labour conference speech he did speaking about the birth of the NHS. It’s a pretty good speech just to track down, it’s very moving,” adds Tom.

But outside of political and literary references, there is also a deeply personal fire running through the lyrics of these songs. “[‘Black Fire’] is very much about domestic violence. Personally, I didn’t give any thought to the lyrics at all when we were writing and recording, and playing with Paul in the band for two years. I never really thought of it until [new vocalist] Simon [Wright] joined and one of the first things he asked was the meanings behind the songs. Some of them are pretty dark,” admits Owen. “You can tell bits of it were about losing someone and potentially them coming back.”

Breaching and Rei have been released by experimental label Gizeh Records, where the band have found a stable home. “I’ve known the label and Rich [Knox] who’s run it forever. I’ve played in [Knox’s own band] A-Sun Amissa and got drunk with him for years. It was a bit weird, I didn’t really get why he wanted to put it out to be honest, it’s not what the label usually does,” explains Owen. “Some stuff like Nadja is heavy, but in a different kind of way. It kind of felt right, doing the stuff that we do, you can end up on a label with a lot of bands that sound similar, and it’s a lot harder to stand out.”
“It’s kind of cool being on a label with a load of different style bands. It does make it harder picking Gizeh bands that we can go on tour with, but we are doing shows with A-Sun Amissa in Iceland [in October],” adds Tom.

Life moves fast in HYOM, who’ve faced a lot of lineup changes in their time and can be seen almost as a collective, less a band. Between the recording of Breaching and its actual release, HYOM were hit with their biggest lineup change yet, with new drummer Andy Baron, bassist Paul Priest and vocalist Simon Wright all joining in quick succession. “I was worried about the changes, because they’d built up such a strong following already,” says newcomer Andy. “I thought they had a really good recipe going, so coming in I was nervous about how the dynamics would change. But I personally feel we’re doing the album justice playing it live, and the new stuff we’re starting to write is coming together really well.” But the original members, guitarists Owen and Tom and synth player Dan Rochester-Argyle, overcame the odds and chose to keep driving the band forward.

“That first month, of having half a new band, was very worrying because our next big show was the album launch. There was a lot of pressure, and we had to learn everything,” explain Tom and Owen. “It was a bit weird, but Paul had filled in for us before, Andy had driven us on tour in Europe so he was sick of the songs already.” 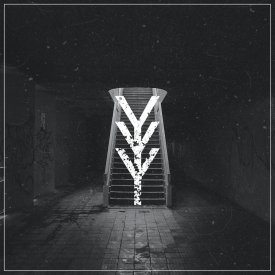 Fortunately, the newcomers were already close to the band and were fans before they had joined. “We already did know the songs, not necessarily to physically play them, but to mentally play them. I was listening to them on repeat all the time,” adds Paul. “I’ve got to get the right amount of drunk, and then all the muscle memory comes back,” jokes Andy.

HYOM recorded and mixed the album themselves, but sent it off to Cult Of Luna‘s Magnus Lindberg for the final mastering process. “The album was so dense. Tom doesn’t like to waste channels,” jibes Owen to Tom, who fires back with “more channels is more good!”

“One of the songs got to the point where we couldn’t mix all the audio so he had to cut it down into groups and edit sections. There were horns, keyboards, guitars, a lot of guest vocals. We needed to work with someone who understood how to make sure none of that stuff gets lost. The mixing part nearly destroyed Tom’s mind,” explains Owen on a more serious note. “I did nearly kill my computer mixing that album,” admits Tom, “I didn’t realise my computer could use 180% of its CPU, but apparently it can!”

HYOM are a band that are constantly facing challenges and obstacles and overcoming them, but one of the greatest challenges lays with their synth and electronics player Dan, who suffers from Cystic Fibrosis. “I’ve obviously got an illness, but when it comes to music and playing live, I don’t think about it. There has been several rehearsals where I’ve not come because I felt really shit chest-wise, so I’ve just taken a day off, but I’ve never missed a show due to my CF. I’ve been in hospital once when we played in Salford, so I left hospital for the evening, played a show, and then went back to hospital!”
“He’s harder than the rest of us,” adds Andy encouragingly.

When it comes to their live show, HYOM often end up playing on the floor, due to not being able to fit six band members on stage at the smaller venues, adding to their intensity. “Every show is different, so the dynamic and the way it’s set-up adds to the uniqueness. Sometimes it’s way more fun to play on the floor, other times it’s nice to have a stage that we can all fit on. The variation is what makes it more interesting. Every show is different, we just turn up and work out what’s going to work and run with it,” explains Tom.

“The last day of the European tour we played in Ghent [in Belgium] in a tiny cafe bar. There was basically a little section for us to play and the bar got completely rammed, so it was a great show that’s going to stay in my mind for a long time,” reflects Dan.

Logistically and financially, it was very tough for HYOM to tour across Europe, and sadly it’s getting harder and harder for small independent bands to be able to tour at all. “Financially, we didn’t make any money doing it. We knew that going in, it was just about going out there and doing it and hoping it wouldn’t cost us too much, but in the end it went really fucking well. Owen booked all of the shows himself, did a mint job,” reflects Tom.

“We only broke one of the vans,” jokes Owen, who quickly realises the sad reality that bands may face after Brexit takes place next year. “I know in Germany if you earn a certain amount of money from being an artist of any description, you can get subsidised to help you live so you don’t have to work. Obviously nothing like that exists in the UK. Going into Brexit in March, we really don’t know what’s going to happen with additional costs of going abroad on tour.”

Whatever happens, Hundred Year Old Man continue to prove themselves as a relentless machine chugging on, overcoming the challenges that come their way. “I don’t want to leave too big a gap between releases. If you stop and think about it for too long, it ends up taking a lot longer. I want to just get on with it and make writing part of the daily life of this band. We’ve got a whiteboard setup and some of it isn’t a drawing of a penis!”

Astral Noize Records will be re-releasing an extended version of Breaching on cassette for release on 1st February. Pre-order here.